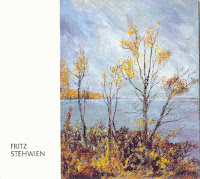 A great review on the Retrospective booklet:
reviews.skbooks.com
Review by Shelley A. Leedahl, September 2015

The softcover book Fritz Stehwien: A Retrospective, originally published in 1993 and later released with an updated biography, was a family affair. The book-not unlike a gallery catalogue produced to accompany a major artist’s show-is prefaced by introductions to the German-born artist’s life and work by daughter Barbara Stehwien and daughter-in-law Nancy Robinson-Stehwien. What follows is 20 attractive pages of black and white and colour images of the prolific artist’s work, including landscapes, portraits, and still-lifes.
First, the man. In the introductions we learn that Stehwien was the quintessential artist, always ready to capture the spirit of what was around him, and as such he lived a full and interesting life. “I have not known him to go anywhere without his materials,” his daughter writes, adding that if he didn’t have everything that was required, he would “improvise using the back of painted or printed matter, even restaurant napkins.” She says he would use “any old pen rather than lose an important moment.”
The use of “moment” here lends a clue to the value the subject of this book saw in those brief snatches of time, when perhaps the sun was only momentarily striking the leaves of a tree and making them golden, or brightening a distant field in a prairie scene, like he illustrated in his painting “Old Farmyard, 1984”.
The author speaks of her father’s vocation as “an inherent part” of him. “Even at family get-togethers he will not rest.” This passion is reiterated by his daughter-in-law, Nancy, who writes of the artist’s “zest for life,” the “unerring perspective evident in his rendering of buildings and cityscapes,” and “his ability to see the subject of a painting in something most of us would pass by without a second glance.”
Now, the work. Through his spontaneous charcoal and pastel sketches;
his oil portraits; his pencil, pen, and ink drawings; woodcuts; and his acrylics-indeed it seems he covered all the media-I agree with his daughter that her father was a “versatile” and highly-skilled artist. Apparently the “powers that be” at Saskatoon City Hall believe the same, as Stehwien’s name has been added to the list of those who will one day have a city park named after them.
I was particularly moved by the book’s front and back cover images. On the front, “Autumn at the Lake,” an atmospheric acrylic painted in 1989; and on the back, a Saskatoon winter scene, revealing children playing on a riverside hill, the Bessborough Hotel rising proudly in the background. Lovely. I also much enjoyed his precise pen and ink renderings in “Russian Peasants” (1942), “Warsaw” (1944), and my favourite (perhaps because I know the subject so well), “White Pelicans in Saskatoon” (1993). The latter made me homesick.
The book concludes with an impressive biography. Clearly Stehwien was as generous as he was gifted: in his final year, 2008, several paintings were donated to organizations, including the Saskatoon Symphony, Open Door Society, Boys & Girl Club in Saskatoon, and to St. Paul’s Hospital Foundation.
Posted by B. Stehwien at 13:59 No comments: